Earlier in September 1745, Bonny Prince Charlie had fought and won battles at Prestonpans and Carlisle and marched towards Derby, in a bid to oust George II and claim the throne of England, but lacking local support immediately retreated back to Scotland. So most of Scotland at this point was under the flag of Prince Charlie, even if they did not actively support him. 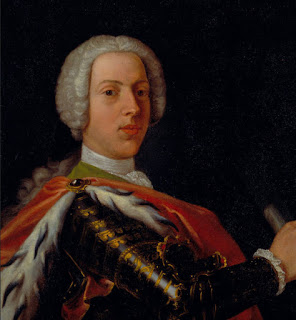 Over the winter he gathered an army to march south of the border once more, following successful battles in Stirling and Inverness early in 1746; but he finally came second in the famous Battle of Colludon of April 1746 losing most of his 9,000 men to the army of Duke of Cumberland. (Then he fled to France disguised as a women to live out the rest of his life in obscurity.)

The December 1745 that notice posted in The Scots magazine reflected preparations by The Duke of Cumberland to equip troops for the campaign against 'The Rebels', and I look at the quantities and assume they were expecting to equip some 10,000 troops.

Notice the use of the old form of 's' being 'f'. I wonder what the Spatterdasles were?

Meanwhile, in England, something very similar appeared in The Derby Mercury on 20 December 1745:
"In Purfuance of a Letter to his Lordfhip from his Royal Highnefs the Duke of Cumberland and alfo of another from his Excellency Marflial Wade, have unanimoufly Refolved and Contracted for 12,000 Pair of Breeches, 12,000 Shirts, 10,000 Woollen Caps, and 10,000. Pair of Woollen Stockings, to be immediately provided for the Ufe of the Army. And have further alfo Contractd for 1000 Blankets, 12,000 Pair of knit Woollen Gloves, and 9000 Pair of Woollen Spatterdasles, to be forthwith provided and fent down to the faid Forces. "

'Down' usually means 'to London'. So the Duke of Cumberland was ensuring that through the cold winter months, the army of England was warmly clad, and a second supply was waiting for him in Midlothian? He must have also been assured that Midlothian (in Scotland) was on the side of the English army - not all of Scotland supported the pretender Prince Charlie.

There again are the spatterdasles.  Thinking that this was winter and the Duke's army was going to walk for a hundred miles at least, could this 'spatter' be a clue -

Nowadays we call them spats, where they feature in military uniforms and period dramas  and cartoons of upper class pre-war England. Those modern cartoon Spats were white and worn over the shoes and under the trousers by men, to protect their boots and shoes from rain and splashing.  Old drawings show spatterdasles as being knee height, worn over the shoes and stockings as an outer garment, maybe made in leather or hardwearing cloth.

As an aside, when I was 8 years old at school in Manchester in 1950, we learned the song ‘The Sky Boat Song’, the story of his escape from the Scots mainland disguised as Flora McDonald’s French maid as she rowed him to safety. We learned it so well that the whole school (some four hundred children) sang it all playtime and wouldn’t stop as we entered our schoolrooms for lessons. All four hundred of us were caned for our disobedience.

Posted by Hazel Woodlander at 15:54 No comments: