Of Being Proficient in Knitting at the age of 7 some 250 years ago. 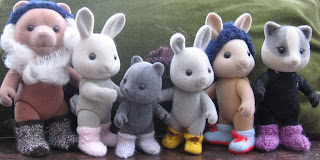 I recently was thrilled to learn that three of my grandchildren wanted to learn how to knit at the ages of 8, 10 and 12. Within three months, they are all proficient knitters of garter stitch and have ceased to drop stitches or finish up with a greater number of stitches than when they started.

In the 18th century, children of the working class were in various parts of the country taught to knit for their future living at a very early age. The following newspaper article shows that children as young as under 8 years of age were expected to be able to complete the knitting of stockings good enough for sale.

The Caledonian Mercury of Wednesday 3 August 1763 published the following advertisement:
Edinburgh, 29th July, 1763. HIS Grace the Duke of Queensberry, and the Honourable the Commissioners and Trustees for fisheries, manufactures and improvements in Scotland, do hereby advertise the following PREMIUMS, for promoting the spinning of woollen-yarn, the knitting of woollen stockings, and weaving of woollen cloth, in the Presbytery of Penpont, which is the upper part of NITHSDALE, in the shire of Dumfries. The Board of Trustees defraying one half of the premiums in money and utensils, and the Duke of Queensberry, contributing the other half, with the ground, buildings, etcetera.


For SPINNING WOOLLEN-YARN. To each of the two girls under ten years of aged who spin the greatest and best quantities of good woollen-yarn, before the 1st of February next, not less than five spyndles, seven shillings.To the family who spins the greatest and best quantity of good woollen-yarn before the first of February next, thirty shillings.
A number of wheels are also to be distributed among proper persons

There were also up to five lesser prizes in each category, so he gave out a small fortune to the successful applicants.

The Duke of Queensbury was obviously a very generous philanthropist locally, as he also helped young tradesmen to own a home, as this paragraph shows:

To the Journeyman Weaver, married, or who marries within two years from this date and works, before the 1st day of August 1764, the greatest and best quantity of the woollen-cloth, proper for Thornhill market, a house lately built in Thornhill, consisting of a kitchen and shop , and a garden at the back of the house, to be possessed by him and his heirs, provided they continue the business of weaving, rent-free, for 19 years ...

There are still many knitters who sell their work, and there will be those who make their living knitting as machinery still cannot replicate the finest lace or Fair Isle; though perhaps not at such a young age.

Knitting has evolved since 1764, now being predominently a leisure occupation. 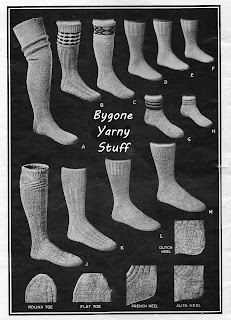 My designs have now expanded beyond little collectible clothes; please visit my new BygoneYarnyStuff shop in Etsy, where you will find republished patterns of yesteryear, not quite as old as 1764, but a few going back more than 100 years. I have collected several stocking and glove patterns for those who want to re-create original designs. More patterns appear regularly as I delve into the past!

Woollywoodlanders designs for the leisure knitter who wishes to create exciting little collectible items of clothing for Sylvanian Families or Calico Critters.

Posted by Hazel Woodlander at 11:37 No comments: