A Ramble Around UK Knitting Needles

Over the last century or so knitting needles have evolved through several phases. Once the technology for pulling wire had been developed, knitting needles could be made of steel or other metals, instead of wooden and bone needles which previous generations had used.

The steel knitting pins prevalent in the 19th century were made of pulled wire. As a result, the standard sizes of British needles were the same as those used to measure the thickness of strands of wire. Steel wire came to be measured in thousandths of an inch by its diameter, and this developed into the measuring system for knitting needles used in the UK, but there were many different wire gauge standards in use within the UK, and individual manufacturers produced their own needle gauges. It is thought that some of the old UK needle numbers were maybe based on the numbers of the increasingly fine dies that the wire had to be drawn through, and thinner needles thus had a larger number. As a conversion guide, old UK size 14 is now equivalent to modern 2 mm needles (US 0).

Wire was coiled for delivery to shops and manufacturers, and many people made their own needles out of this wire, cut into lengths and sharpened at home. Sometimes this wire retained its curve, and stories of bent knitting needles are plentiful.

An old Cornish photograph of two young Polperro girls, Mary Jane Langmaid and Elizabeth Jolliff knitting knit-frocks (ganseys) shows their ‘soft’ metal needles to be very crooked, obviously bent and straightened many times and those blunted points must have made knitting quite difficult. 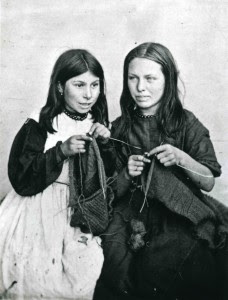 Photo to be seen on http://www.thatsmycornwall.com

There are stories of knitters being unable to buy manufactured knitting needles in times of isolation, hardship and war, and using ingenious sources to meet their need. Umbrella wire and bicycle spokes have been mentioned and no doubt local engineers and wood turners would have been pleased to produce needles too. Early knitting ‘recipes’ did not quote needle sizes either, so each project would have required careful sample knitting to arrive at a satisfactory finished item.

In the 1970s the UK began to go metric. Metric sizes were introduced into knitting needle manufacture. These did not give an exact conversion, meaning in theory old needles used for new knitting pattern leaflets would not always give the expected results, and vice versa. But generally the differences in old and new sizing is negated by the bigger difference in our personal knitting tensions and very few people will notice the difference! At the same time, the UK’s familiar one-ounce and two-ounce skeins of wool yarns were dropped and we had to get used to 25 g and 50 g balls (which meant small children were no longer required to hold the skeins out with weary arms while Mother wound wool into balls.)

In my personal collection, many inherited and many more gleaned from jumble sales and Ebay mixed lots, I have old needles made from Bakelite and ceisin (made from milk!), bone, steel, wood and various plastics. Early steel needles frequently went rusty and need polishing before use. I also recall coloured metal needles which stained the wool.

These older needles had blunter points than many available today, and tapered points replaced the old rounded tips during the 1960s to 1970s as knitters preferred the newer styles. I usually knit with a knitting belt and find the old rounded tip-sides actually work easier with the belt because the belt demands less movement at the needle tips meaning that the newer tapered points result in tighter stitches because the stitches are formed at the tips. Perhaps one of the reasons why the old blunt tips fell from favour is that very few people now use a knitting belt or a knitting stick. 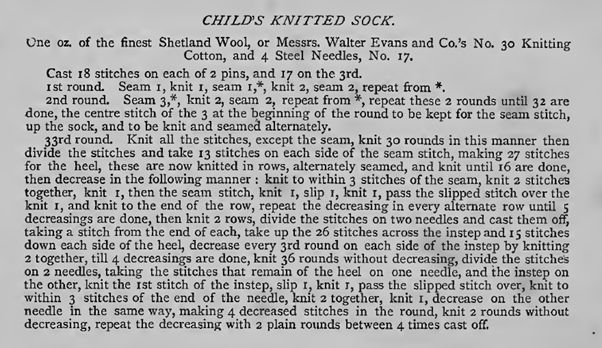 I have three instruction books of the late 19th century giving knitting instructions for infants’ clothing in thin merino yarn using old UK sizes 17 and 18 needles (approx. 1.5 mm). Those were the days when wealthy families employed nannies, nursery maids and governesses to run the nursery, and there was time for them to knit beautiful fine baby clothes to ‘show off’ the family’s leisure and wealth. Our local Museum has an infant’s bonnet knitted with hundreds of stitches per round, and the tiniest elaborate designs – it must have been knitted on needles around Size 24, where even the strongest knitting needles are bendy.Babies wore bootees, so these socks would have fitted a toddler. .

Regular knitting stores rarely sell knitting needles thinner than 2 mm. if you wish to knit a 19th century toddler's sock, a Sanquhar glove, miniature dolls house clothing, or fine lace, you need needles thinner than 2 mm. I have been able to source double-pointed needles in old UK sizes 15 (approx. 1.85 mm, US 00) and 16 (approx. 1.75 mm, US 000) and have made these available on my online store BygoneYarnyStuff on Etsy, along with the more common sizes. If they prove popular I hope to import more. Find those 1.5 mm and 1.25 mm needles here. I also have a few fine circular needles and dpns of 1.25 mm – on my website http://www.woollywoodlanders.co.uk/needles.php 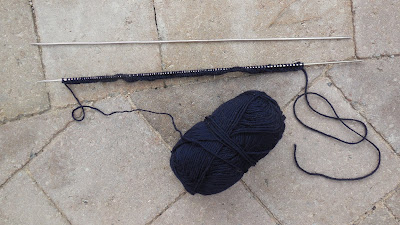 Another knitting needle ‘find’ is very long 14 inch (31 cm) dpns which are almost essential for Guernsey (gansey) knitting with their 300 to 400 stitches. These also work nicely for shawls and other projects with many stitches. I have these available on Etsy on my BygoneYarnyStuff shop.

Posted by Hazel Woodlander at 15:48 No comments: