I have spent many weeks and months researching the old knitters' reputed rapid speed of knitting.

A vintage film made in the early 1930s in Shetland, Scotland, showed aspects of lives which would not have changed for a couple of generations. This is many years before oil was discovered in Shetland and the old ways of life were to change for ever.

A while ago, this old black and white film was shown on British TV under the title 'Visit the Crofters' by the British company 'Talking Pictures' which discovers old and often unknown films from the archives of the famous old British film studies such as Pinewood. I watched it quite by chance one morning, and the lovely people at Talking Pictures have given me permission to analyse their film to study the old methods of knitting. The whole film also shows crofters rounding their sheep up off the hills, plucking - rooing - them, fishing for herring and making baskets. The film had a tourism-type commentary and some background music, but these added nothing to the subject of knitting.

There have been stories of the phenominal speed that the old knitters could reach, and just as many suggestions that these stories were fictions - How could anyone possibly knit up to 200 sts per minute! The fastest knitters in the world of the 21st century cannot exceed 100 sts a minute. But these stories came from researchers not known for exaggeration. 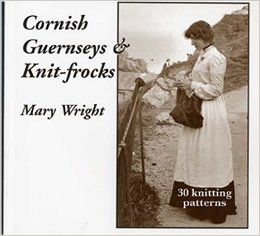 'Freed from the necessity [by using a knitting stick] to hold the working needle, the knitter could use the fingers of the right hand as a shuttle to move the stitches from the left-hand needle. This greatly increased the speed of knitting and by a rhythmical motion of arms and body, the knitter would strike the loops 'faster than the eye could see'. Experienced knitters achieved very high speeds of about 200 stitches a minute. 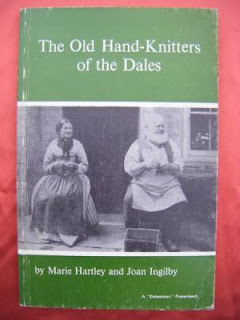 Marie Hartley and Joan Ingleby wrote a definitive book 'The Old Hand-Knitters of the Dales' in about 1949, on professional knitting in Yorkshire (published 1952) and this described the knitting techniques practiced.


"Mrs Crabtree remembers that her mother could knit a jersey or frock, as they were called (US: sweater) in a day and was paid a shilling for it."

If you go to Youtube you will see a video I published a few weeks ago summarising my research on this topic, and you will be able to see extracts from that "Talking Pictures" silent film on the knitters of Shetland. The fingers of the knitters are a blur, but the knitters are indeed working at 2 stitches per second and one of them considerably faster.

So the stories were NOT fiction! you will see from the silent conversation of the two ladies in the middle that this film is shown at real time speed.

The film is mono-colour and very low resolution. The light is poor for the indoor scenes, so examining the film was not easy.
I slowed down the film to one-eighth of its original speed to see the individual hand movements of each stitch.

I could see how each stitch is formed: the wool is held in the left hand, and the working needle in the right. This is not the same as continental knitting as currently practiced, there is no change in the needle angles, and no twist in the actions of the hands. No hooking of the yarn. This is a very relaxed style. 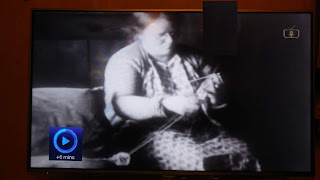 First the right hand needle is swung into the first loop on the left hand needle. The right hand needle is moved right-wards and the stitch is formed by the index finger of the left hand wrapping the yarn around the end  of the right hand needle. This was quite a difficult movement the first time I tried it and it took quite a few minutes to get my finger to work as I wanted! (I can now appreciate how difficult it is for a new learner of knitting!) It is the mirror image of the index finger movement practiced by many right-hand knitters. Immediately the needle is swung back leftwards under the left needle (it now contains its new loop) and a big swing right-wards pulls the old stitch off the left-needle. This big swing has another function too - it pulls just sufficient wool off the ball to feed the next stitch; to snug up the previous new stitch and ensure an even tension (gauge); and of course, prepare for the following stitch.

The right-hand needle now completes its swing back leftwards and immediately enter the next loop ready to form a new stitch.  All the while, the left hand has barely moved and the right hand has not moved its angle.

The action of the right needle is rather like a figure of eight. The knitter is giving a sympathetic sway to ease the needle's swing - is this the swaving, the sympathetic movement, often referred to by the old writers (including Mary Wright), said to be essential to maintain the speed?

The knitters could knit while walking, then the ball of wool is pushed into a pocket or tied to the waist by a little hook, to give an easy 'pull'. The yarn is pulled out from the centre of course to avoid the ball spinning into a tangle.

One knitter is making a narrow band of lace. She has tied her work to her belt to give tension, allowing the old row stitches to be stretched out and therefore easier to enter. The string is moved and adjusted every few rows to maintain the firm tension.

Interestingly, all these knitters are using pairs of needles with knobs. Not a single knitting stick between them!

I timed the knitters by slowing the film down to one-eighth speed! The fastest knitter was knitting at a phenominal 14 sts in around three seconds – that is a rate of 280 stitches per minute.

This gave me food for thought. It has revealed a skill and technique that just about every knitter thought had died out without being recorded. Incidentally, I have discovered another couple of films showing the same fast knitting but as yet I do not have permission to publish them.

To join my newsletter group please go to my website woollywoodlanders.co.uk and email me from the top of any page, and receive a free knitting pattern from my site.

(Unfortunately, in the introduction I appear to be gagged!!) To see all this for yourself watch my video - to be found by its title: